The Cardijn - Lombard Conference 2017 will focus on the following theme


The YCW was the ‘most significant lay movement in twentieth century Catholicism’, declared Australian church historian Edmund Campion in his book Rockchoppers.

Papers will relate to the historical context of the YCW in Australia. For example:

As a young vicar in the parish of Our Lady of Laeken, near Brussels, Fr Joseph Cardijn began in 1912 to organise study circles to provide life-education for teenage working girls.


Partnering with Victoire Cappe and Maria Baers, both young trade union leaders, Cardijn worked to develop a team of adult young women who would act as counsellors or mentors to the study circles for working girls.

After World War I, these study circles developed into a movement known at first as the Jeunesse Syndicaliste (Young Trade Unionists). 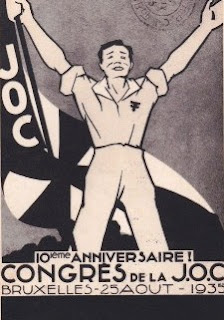 After facing concerted opposition and a possible ban on the movement from Cardinal Mercier of Malines, Cardijn took his case directly to Pope Pius XI, who endorsed the work of the movement in a memorable meeting in March 1925.

Developing a range of publications and resources to be used by priests in parishes, Cardijn successfully promoted the YCW across Belgium, from where it spread rapidly to more than 50 countries before the outbreak of World War II.

Priests became the key actors in the development of the YCW, which promoted a concept of "the specifically lay apostolate of lay people" acting to transform their lives, their milieux and ultimately the whole of society through their influence and action.

The YCW in Australia

The JOC-YCW model came to Australia during the 1930s through the agency of Fr (later Archbishop) Justin Simonds, who had studied at Louvain during the late 1920s, Paul McGuire, a lay apostle who had enncountered the movement in Europe, and Kevin T. Kelly, a member of the Campion Society in Melbourne. 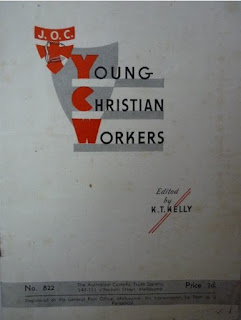 However, it was Fr Frank Lombard who became the driving force in the large scale establishment of the YCW in Melbourne, and eventually nationally.

By the 1950s, the Australian YCW had become one of the largest movements in the world mobilising tens of thousands of young workers through parish groups across the country.

The YCW Leaders Bulletins mostly written by another Melbourne priest, Fr John F. Kelly, and modeled on programs developed by Cardijn in Belgium, was a key factor in the rapid expansion of the movement. 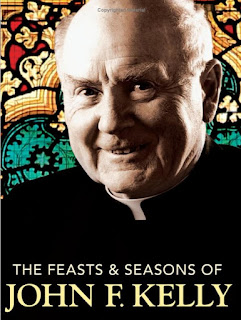 The strength and influence of the Australian YCW was recognised in 1965 by the election of Helen Jagoe from Bathurst diocese as secretary-general of the International YCW. Four years later, Fr Brian Burke became Cardijn's own successor as international chaplain to the movement.

Many other Australians also played significant international roles in the development of the YCW as extension workers or as international leaders.

During the 1990s, another Australian priest, Fr Hugh O'Sullivan, from Adelaide, became the chaplain for the International YCW in the Asia-Pacific region. He too died prematurely in 1997.

From the beginning, the Cardijn method focused on forming lay people to take leadership and responsibility in every sphere of their own lay lives. This formation given by the YCW has long been recognised as one of the hallmarks of the heritage of the movement.

The YCW also pioneered a conception of laity and lay apostolate that Cardijn expressed as "lay people in the front lines" of the work of the Church in the world.

At Vatican II, Cardijn played a key role in three major capacities, initially as a member of the preparatory commission on lay apostolate, secondly as a peritus in the conciliar commission and finally as a Council Father after Pope Paul VI appointed him as an archbishop and cardinal.

More than 100 conciliar bishops who had experience as YCW chaplains as well as many more who had worked with other specialised Catholic Action movements had a decisive influence on the Council's conception of lay apostolate and methodology (see, judge, act).